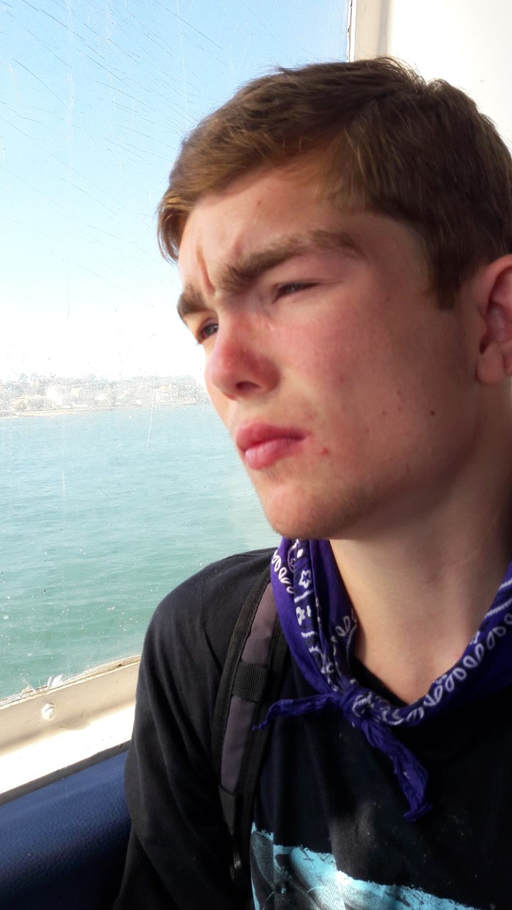 Written by his mother (France)

Until July 17th 2017, my son, Django was known as having a complex and unknown malformation syndrome associating severe psychomotor delay , ASD as well as facial dysmorphia.
Regarding this clinical condition, manifold long periods of hospitalization punctuated his life with various and complex surgeries. Even today numerous and frequent medical follow-ups and exams regulate our life.
Django makes progress at his own pace and sometimes in a very chaotic fashion. This Journey has been made of broken illusions and constant search for recognition of his uniqueness.
Django unconsciously has sparked off hundreds not to say thousands of e.mails as well as frequent phone conversations with a great many of professionals so as to adjust his reality, my wishes to a system that is at times too rigid, however my hopes were given answers with more or less relevance. My wishes were at times complicated to be understood and at times as simple as those of the single mom, that I am , who is willing to take on her son’s problems with the sole aim of offering the best and most serene future to her child.
A lot of professionals have been the witnesses of Django’s transformation from a baby then a young boy bearing the scars of survival  into a joyful and vivid young man living his way..

A STORY OF DOOR
Portal vein
Cavernous door
Portal spleen auto transplant
Open doors
Not completely closed doors
Closed doors
Slammed doors
Broken doors
I meet , discover the doors of perception (dead easy)
Behind the door
Eavesdropping
Waiting in front of the surgical unit
No ! Never wait in front of it , but a little farther !
Crossing the door
Closing and opening
Opening of your body
Closing of your organs
Closing of your flesh
Your scars are the doors which saved your life
The scars of life, giving strength and revealing weaknesses : yours, mine.
Ah lovely resilience ! this art you taught me :
You have sharpened my senses, I see what you see, feel what you feel.
I know your angers, your tears, your smiles, your laughters, your voice that sings, shouts, screams, breaks and that does not articulate words.
I am proud to see you growing, you make me grow up every day.
It is not war, it is a struggle so they say !
Our strengths takes us to the extremes of feelings.
Your legendary strength has saved you, you fought against « all your diseases » which opened some doors while closing others !

MAZE
We are looking for the exit, the SOS exit, the fire exit !
We want to get out free !
We simply have to fight like anyone, only differently though.
Why ? Why ? Why ?
The world is not ready to open itself.
On our way, heads turn back, fingers point at us.
What you bear is unbearable for so many people,
However some bear you in their heart.
Respect, love, tender feelings
You are understood or not, you are listened to or not,
We let you grow according to your pace
Ticking ticking ticking, one waits for you or does not.
Nobody …until July 17th 2017 nobody knew, you did not do anything, it is your life, your destiny.
I have tried hard to find your place , my place in this world, many times the gearing was blocked, the squeaky wheel needed oil, therefore I pushed hard and each time there was a little air blowing, I managed to make our way, to allow us to carry on our wild Journey !
Although the respectful, the life lovers, the sentimentals have helped us, we have been hurt, beaten, injured, broken ; and the two of us are together, apart at times to enjoy more of each other later. You and I are happy, the others have made, still make us unhappy however. Some 30 years ago you would not have been here and in 5, 10, 20 years the extraordinary life situation or rare life will have hopefully changed.

I coped with the unknown for years, obviously you underwent genetic tests..., we were not even given any negative answers…Thus I forgot about finding out ... I wondered at times why nobody had ever heard of children , teenagers, adults like you. I was told your syndrome was unknown, had no seal of approuval. Thus I implemented what I thought was best for you not accepting what you were being offered because it did not meet your needs.
On July 17th 2017, I was given the name of your syndrome though not in the official fashion- that would not have changed much anyway…. Right away I browsed the internet and found the website of the ADNP Kids Research Foundation and the following day namely on July 18th I talked with Sandra Bedrosian Sermone whose first question did concern the teeth ! in the meantime I realized you were no longer the only one ! I was overwhelmed with happiness . When later I joined the ADNP family I went « crazy » on seeing other children looking like you or the other way round.  I could see you in every child , I could see your smile, the way you move, the way you look at life, the way you hold objects at every age !!
I also realized that I had made the right choices- as far as therapies were concerned- for you following my instinct. Today I can say how important it is to have a diagnosis !.. For years I had reckoned I knew enough and that I did want to know more !
For 15 years and 7 months , a great psychologist has taught, helped me a lot, has taught me to ask questions so as to understand better what was going on, it was so huge : nobody knew what had happened, even the best French medical teams were worried at times for my son’s life «  without telling me » because they knew Django needed me to survive.
She would ask me questions, would make me repeat Doctors’ and Nurses’words and I quickly became very accurate so as to be useful because everything was going too fast. Right from the outset I had a role which was not mine namely I became the walking medical file of my son. My son and I almost spent 3 years and a half in hospitals..This psychologist was here to help me hearing the unbearable when my son was between life and death. She understood my thoughts, my shortcuts..I have also learnt how to become less impulsive. This lady who retired has also been the witness of the parents’ love story of Django as well as the end of it as violent as the discovery of a new disease :stomach, heart, kidneys, spleen, liver, and kidneys again, scoliosis, and and and autism , the lung…No obviously this cannot be compared.. the hospital, the diseases being announced almost every day during the first months of my son’s life, the mental handicap have smashed our life while protecting it at the same time.
Today I am happy to have found the ADNP family because I am no longer alone but still I miss someone so much.. and now I want to know more and I want everybody to know ! The moment Django was diagnosed I understood I had a new mission not only for my son but for all the ADNPkids.
I do thank the French AP-HP for saving my son’s life when he was younger as well as the MDPH of Paris…