How ADNPkids began, what's going on now and what's next 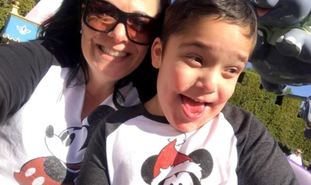 My journey to creating "ADNPkids" started in May of 2014 when our son Tony (#JourneyToCureTony), was one of the first kids in the US diagnosed with an ultra rare genetic change on his ADNP gene, which is a master brain gene. (Read about the crazy odds of that happening at How My Son Won the Mega Millions Lottery Jackpot of Rare Genetic Disorders.

At that time, there was only one (1) very limited medical publication that existed on 10 children, and our son was a million times more medically complex, so we were very confused!

​To make it worse; It had NO name, NO doctors or specialists who understood it, NO place to find support or connect with other families, NO website, NO medical protocol, NO treatments and worst of all, NO cure! ​
It all began when Tony and his twin brother Rocco were born exactly one month early on his grandparents 40th wedding anniversary. Everything was perfect and our daughter now had two little brothers and our family was complete.

But within hours things started going completely wrong with Tony’s heart, brain and body. He was taken to the NICU and it went downhill from there. He ended up having his first heart surgery at 3 months old our world spiraled out of control.

Tony spent the first few years of his life in and out of the hospital with a never ending list of surgeries, severe medical complications, procedures and diagnostic testing yet doctors could not tell us why this was happening to our baby boy. We did not know if he would live or die or if his twin brother was affected.

As months went by, we watched his twin brother grow and meet all of his developmental milestones and watched Tony just fall further and further behind.

He started having severe feeding issues that were causing failure to thrive. He could not chew or swallow like a normal baby so he needed to have a feeding tube surgically placed in his stomach. He was diagnosed at 6 months old with numerous brain abnormalities and cortical blindness and then hydrocephalus.

He didn’t play with toys, look at faces, clap or repeat sounds. He could not crawl, walk, or talk. He didn’t sleep through the night, he developed seizures, had mini strokes and started having episodes of mild global diffused cerebral atrophy. And this was just the tip of the iceberg.

It seemed as every month went by, he was getting a new diagnosis about a problem in some area of his body, yet no one could tell us why this was happening.

Some of his early on symptoms where neurological issues such as extra axial fluid and delayed myelination. He had several different heart defects which resulted in heart failure at age three and a 2nd open heart surgery. His vision changed and he was diagnosed with a complicated neurological vision impairment called CVI, severe infant eating disorders, gross motor, fine motor, oral motor, speech and intelligence delays.

He developed behavioral disorders as he grew, he has severe Autism, sensory processing disorder and motor planning disorders. He has profound cognitive delays, is non verbal, and functions much like an infant in a big boy body. He needs 24 hour care with all of his daily living needs such as feeding, dressing, bathing, and does not understand the world around him so he is at great safety risk 24/7. He does therapy, including ABA, Speech, O/T and P/T 5 days per week and this disease robs him from his steps forward each time he regresses and there is no treatment and no cure.

Getting a diagnosis:
Tony underwent 6 years of endless genetic and diagnostic testing before his doctors gave up hope of finding a diagnosis. At that point they told us it was unique to him, his own personal “Tony Syndrome”, and that we would never find out what was the cause. We were told to expect things like severe delays, continued medical complications, brain degeneration and that he may not live a long life, and if he did, he would need 24/7 care. They painted a heartbreaking picture that NO parent wants to hear for their child.

He saw a multi-disciplinary team of doctors and specialists weekly at OHSU before we finally found out what was causing this. In 2013 we went out on our own in search of a diagnosis and in 2014, across the country at Duke University, using Whole Exome Sequencing, he was diagnosed with a denovo mutation on his ADNP gene.

At that time, only 1 single medical publication existed so that is what they handed me. The large group of doctors and researchers at Duke University informed me that he was the first child diagnosed in the world following this publication and the only case in the US. They said that they were stumped because they had never heard of it and because he was much more medically complex. They had no helpful information to give us other than to suggest we try to find other families and contact the scientists who wrote the paper.

So there we were; we finally had a diagnosis, but there was NO one who understood it, NO one to talk to, NO one to help us figure out how to help our child and NO information for us to understand what this diagnosis meant for his future. NO doctors, NO medical centers, NO treatment and NO cure. We were completely alone with this awful rare condition, with no one to connect with and still feeling clueless.

It is because of that feeling that I created ADNPkids, so that no other family would ever feel alone like that after receiving an ADNP diagnosis and so that they had a place to find other families, information, support and hope.

When I returned home from Duke, I became what I call - a crazy obsessed, highly caffeinated, middle of the night internet stalking, mommy researcher,”. (My own little ADNP-FBI.) I started researching everything that I could about the ADNP gene, and let me tell you, at that time very little existed. While my family slept at night, I would read ever medical publication, manuscript, journal and research study that I could find linked to the ADNP gene. I reached out to the research team in Belgium who discovered the syndrome and the neuroscientist in Israel who discovered the ADNP gene because I wanted to learn more and wanted to find other families.
​
That is when ADNPkids was born! I created an "ADNPkids" international parent support group on Facebook with the goal of finding and connecting families all around the world with children affected by ADNP. At that time there were only 10. My hope was that we could learn from one another and find support. This is now what we call our “ADNP Tribe”.

Following that I launched my own personal research project because I identified that our children shared much more medically complex conditions than currently known. (exp. ADNP-FBI) I began to collaborate with medical researchers around the world and started my own parent generated database. I built my own parent generated patient registry, and to date, have the largest group of diagnosed patients in the world. (Jan 2020 - 250 chikdren)

RESEARCH WORK: One of my proudest research accomplishments is discovering a genetic diagnostic biomarker for ADNP. In early 2015, I discovered "premature tooth eruption" as an early diagnostic biomarker in ADNP children. You can learn more about the biomarker by clicking here: ADNP BIOMARKER. To date, I have co-author 5 ADNP specific medical publications. I work with Tel Aviv University, Coronis Neurosciences, Cognitive Genetics-University of Antwarp, University of Washington TIGER/Bernier Lab, the Seaver Autism Center at Mount Sinai, the National Organization of Rare Disorders, the Simons Foundation and Autism Speaks; pushing for research, awareness, education, medical protocols and most importantly - treatments and a cure.

Additionally, last year myself and another ADNP father named Matt Davis came across a drug called Ketamine. We researched and pull clinical data and hypothesized our idea that low dose ketamine could treat children with ADNP because in low doses it increases ADNP expression. We presented our idea to Mount Sinai, last year, and their team decided that it looked like a really great treatment options so they moved forward, and in January we received the go ahead from the FDA to start a phase 2 clinical trial. This is so exciting because we as parents found this drug, did all the work and research, and presented it to the world expert of ADNP Syndrome, who is now taking the baton to do the drug trial. In addition or foundation along with all The wonderful and amazing ADNP families, have raised over $100,000 for this drug trial.

RESEARCH FOUNDATION AND THE FUTURE:
In 2016 I founded the ADNP Kids Research Foundation, which is an accredited 501(c)3 non-profit organization with the mission to provide advocacy, support, education and to accelerate research for treatments and a cure for ADNP syndrome. In 2017 I built our Board of Directors and have been moving full speed ahead ever since! We are beginning to see global awareness build and treatment possibilities in the near future for our ADNPkids.
BELIEVE
THERE IS
HOPE FOR A CURE!

Welcome to our ADNP family! YOU ARE NO LONGER ALONE. Please feel free to contact me using the email below 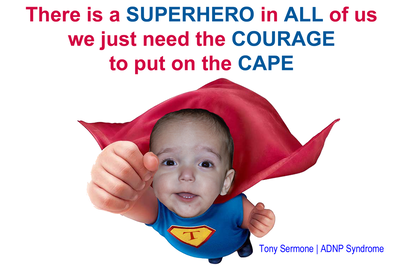 Sandra serves with the following organizations.Several of her co-authored scientific publications include Nature Translational Psychiatry, The Journal of Molecular Neuroscience and Frontiers in Endocrinology.
Some of my articles, news stories and publications:
To learn more about the ADNP Kids Research Foundation and view projects and clinical trial information, please go to the ADNP Kids Research Foundation website at www.ADNPfoundation.org or click on the logo below.