This past week I was able to attend the Global Genes Fifth Annual RARE Advocacy Summit in Huntington Beach, California. Along with 5 other wonderful ADNP Moms (Abby Z, Angela D, Lenore R, Liliana A, and Penny F), we were one of the largest groups supporting one syndrome.

We learned important next steps for taking action in the areas of research, legislation, fundraising, and community support. Core fundamentals and skills to help start, grow and strengthen our nonprofit organization - ADNP Kids Research Foundation. Strategies for building online communities and why they are essential for rare disease awareness. Understanding the power of genetic data and patient involvement for advancing research for our disease. Tools and insights into crafting successful collaborations with researchers, biotech, pharma and the FDA. We made invaluable connections with advocacy leaders with the US government, NIH and FDA that will help us move forward and define and propel our priorities forward. It was educational and inspiring!

To end the Summit, we were able to attend the Global Genes RARE Champions of Hope Award Gala. It was an honor that Global Genes allowed our very own Angela Downing, mother of Alexi, present the Champions of HOPE Award for International Science to our wonderful Neuroscientist Professor Illana Gozes. The night was exciting, emotional and amazing. Professor Gozes came all the way from Tel Aviv University and described new and exciting treatments that she is currently working on that could possibly help our children in the near future. Below you can see photos from the Summit, the Awards and the Gala as well as links to You Tube videos of the events.

We are already planning to attend next year. If you are interested please let me know. 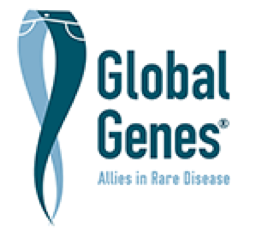 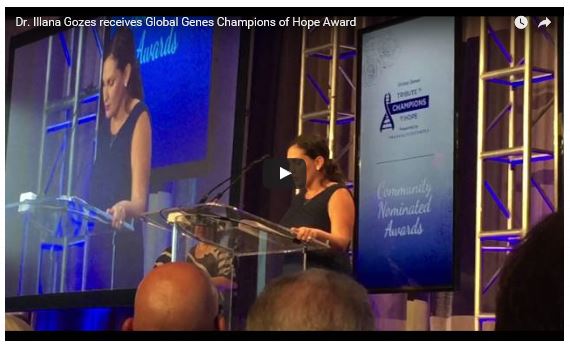 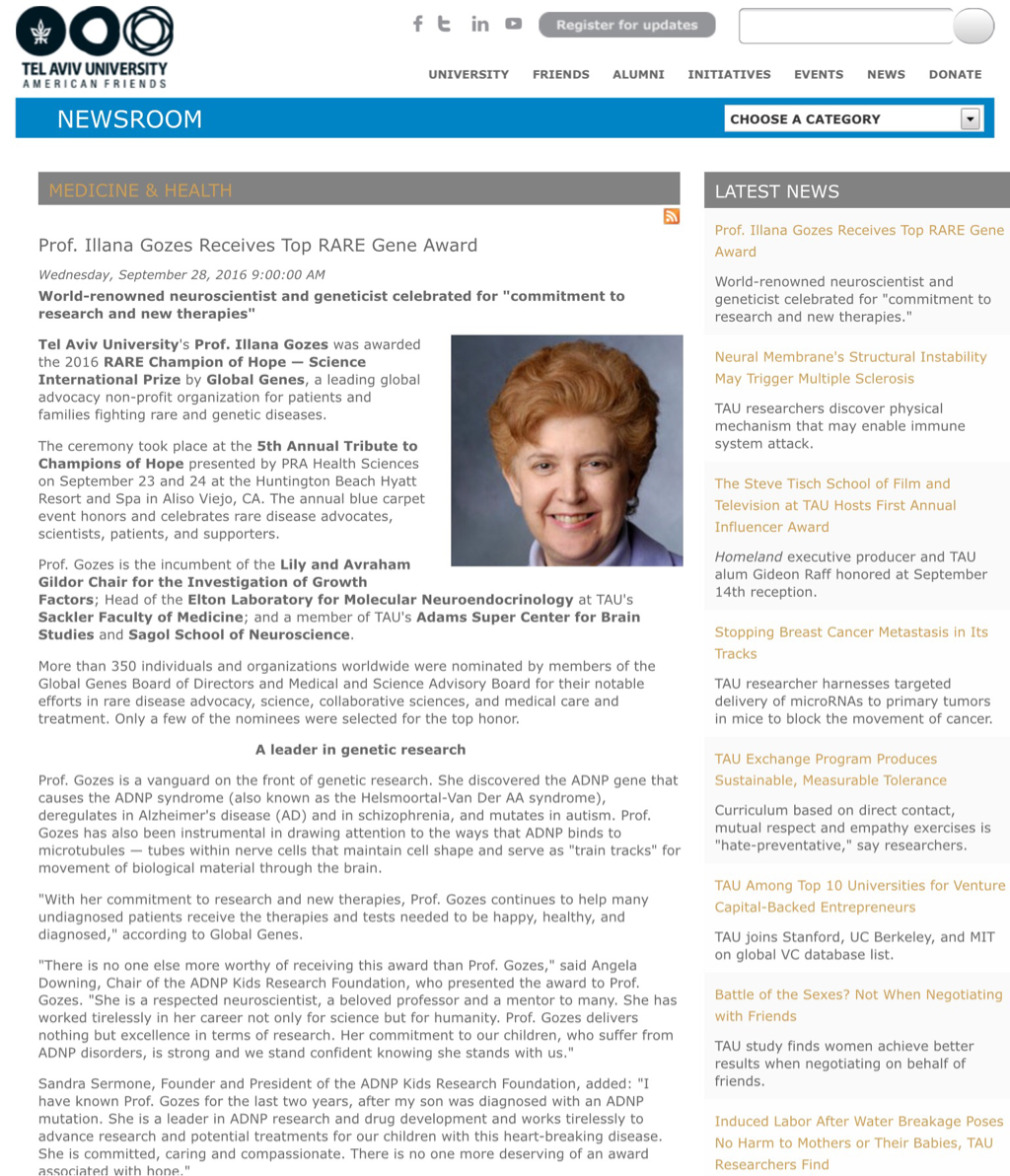 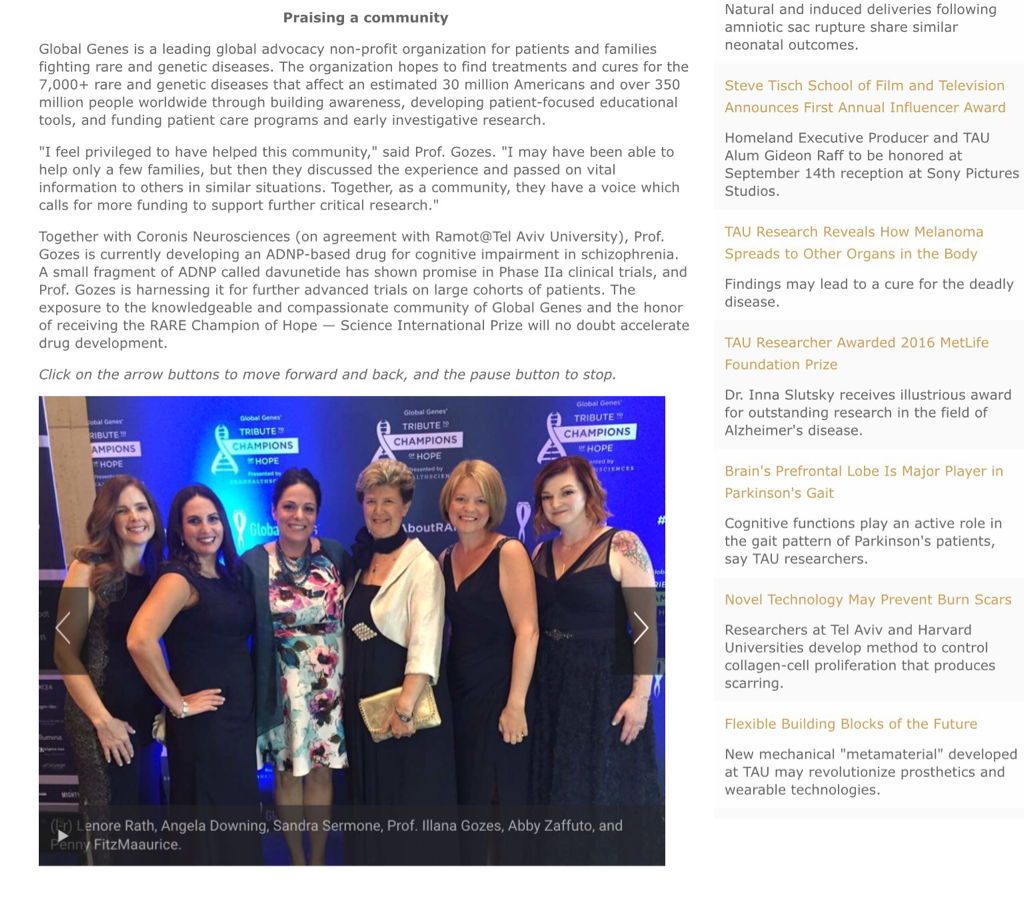 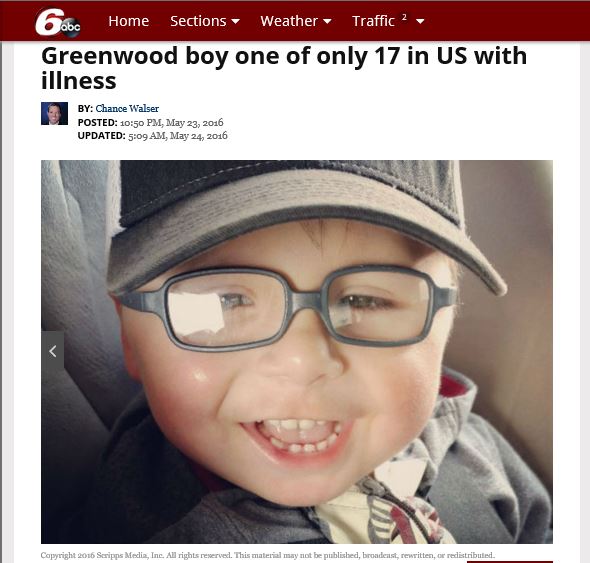 GREENWOOD BOY ONE OF ONLY 17 IN US WITH ILLNESS

INDIANAPOLIS -- A 2-year-old Greenwood boy is one of only a handful of people in the country with a rare disorder that prevents him from walking or eating on his own.

In March, doctors diagnosed Adam Shuck with Helsmoortel-Van Der Aa Syndrome. He's one of only 17 known cases in the U.S.  The condition means his brain function and muscle tone are not where they should be.  At almost 2-and-a-half, Adam can't walk or sit up for long stretches, and he's fed through a tube in his stomach.

His parents don't know when progress will come.  "I wish somedays that we could trade bodies so he can know what it's like to eat and drink things and everything like a normal person," his mom, Tiffany Shuck, said.  The Shucks want to start with getting him to walk. They've set up a fundraising account to get Adam a piece of equipment similar to his walker, but it allows his parents to stand in its place. His muscles will grow while walking step-by-step with his parents.  Adam's physical therapist suggested it, but insurance won't cover it.  "Not necessarily a medical necessity, but for a better way of life for him," Shuck said.  Despite Adam's challenges, Shuck says he's a very happy boy – content to roll around and smile most of the day.
To learn more information about the fundraiser, click here.

TO VIEW THE LIVE NEWS BROADCAST - PLEASE CLICK THE LINK BELOW
http://www.theindychannel.com/news/local-news/greenwood-boy-one-of-only-17-in-us-with-illness 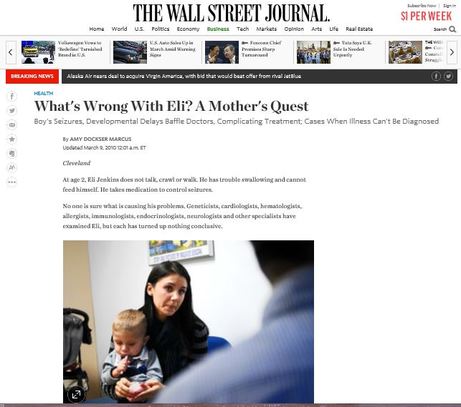 Posted in
THE WALL STREET JOURNAL

At age 2, Eli Jenkins does not talk, crawl or walk. He has trouble swallowing and cannot feed himself. He takes medication to control seizures. No one is sure what is causing his problems. Geneticists, cardiologists, hematologists, allergists, immunologists, endocrinologists, neurologists and other specialists have examined Eli, but each has turned up nothing conclusive.

Janelle Jenkins holds her son, Eli, while talking with neurologist Gary Hsich at the Cleveland Clinic. She traveled from Orlando in hopes of getting a diagnosis for her son's condition. In mid-December, Janelle Jenkins and Eli flew from their home near Orlando, Fla., to Ohio—the latest stop in her quest for a diagnosis. Ms. Jenkins, 31, left her 5-year-old and 3-year-old sons at home with their father in order to take Eli to see doctors at the Cleveland Clinic.

"This is one of our last resorts," says Ms. Jenkins. "Some may say a diagnosis is just a 'name' and won't change anything...so what's the point?" she says. "It matters to us for so many reasons."

Ms. Jenkins says she wants to be able to seek out therapies for Eli's condition instead of reacting to whatever medical crisis arises. She needs a name to know where to look. The family can't plan ahead because they have no sense of Eli's prognosis—his likely life span, his intellectual or physical potential, or the problems he will face. Also unsettling is not knowing whether the condition might turn up in the Jenkinses' older children later in life.

Researchers say the lack of a diagnosis affects far more people than was previously thought, although precise statistics do not exist.

The National Institutes of Health set up a special program in 2008 to help undiagnosed patients identify their illness. In a survey of people with rare diseases, 36% remained undiagnosed for one year or longer, and 1-in-7 patients remained undiagnosed for six years or more, according to the non profit National Organization for Rare Disorders.  The NIH estimates about 25 million Americans have rare diseases, defined as affecting fewer than 200,000 people.

A bill introduced in Congress last spring would establish the first-ever national registry of undiagnosed patients. And Internet forums are expanding resources for these patients. While checking one Web site, for instance, Ms. Jenkins found the name of a Cleveland Clinic medical geneticist who had spent seven years before finally reaching a diagnosis for one family. Trying to identify undiagnosed diseases is extremely difficult. Even at the NIH's program, which has so far studied the cases of 240 people, the success rate is only 10% to 15%, says William A. Gahl, who runs the program. "The norm is failure," he says. Some diseases are new and simply haven't been seen before, Dr. Gahl says. And, he says, "We don't even know all the variations of known diseases."  (portion of article deleted regarding another unknown child)

For Ms. Jenkins, the hardest part of the past two years is coming to the realization that she may never have an answer to what is causing Eli's medical problems. The long, fruitless search for an answer, the testing and the trips, have all taken a toll. Insurance covers the doctors' visits and testing, but the travel and hotel stays add up.

Before Ms. Jenkins set out from home, the couple agreed that if this visit to the Cleveland Clinic yielded no definitive answer, their quest for a diagnosis might have to end. Instead, they would focus on reconciling themselves to caring for Eli without ever knowing what is wrong with him.

When Marvin Natowicz, the medical geneticist, met with Eli, he spent four hours giving the boy an exhaustive clinical evaluation. Dr. Natowicz says he looked for the tiniest clues. He felt Eli's hair, examined his toes, checked his vision. He measured the distance between Eli's eyes, the circumference of his head, and carefully studied the boy's fingernails and the whorls on his palms. Anything might send the doctor down a different diagnostic pathway. He asked Ms. Jenkins to send him baby pictures of herself and her husband at the same age as Eli.

Dr. Natowicz says that he lets families know that he will continue searching for a diagnosis for as long as they want. But there are reasons to consider stopping. The costs of tests can be prohibitive. Some are invasive, involving anesthesia, multiple blood draws or skin biopsies. When Dr. Natowicz meets with parents, he says he also urges them to consider the likelihood that, even if a diagnosis is ultimately found, the child's disease might not have a treatment.

A few weeks later, Dr. Natowicz issued an initial report. He felt that Eli likely had a genetic condition affecting his nervous system, but did not yet have a diagnosis. He wants to see the boy again at the clinic in July.

Ms. Jenkins says she will bring Eli back for a follow-up visit. But she says she is being realistic. "I understand there may never be a name," she says. 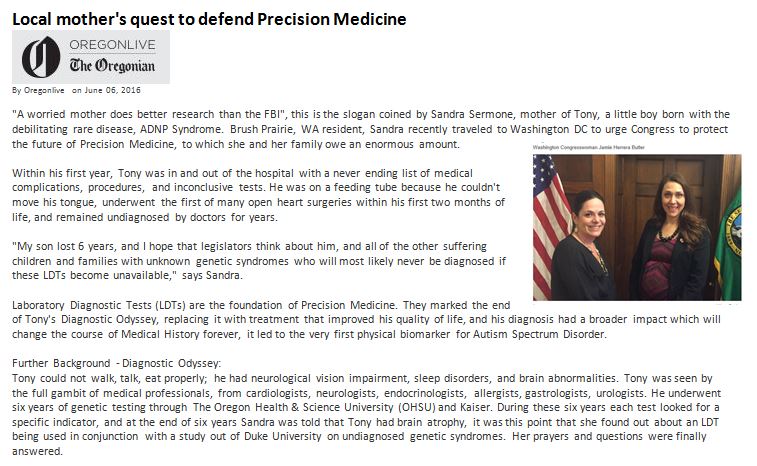 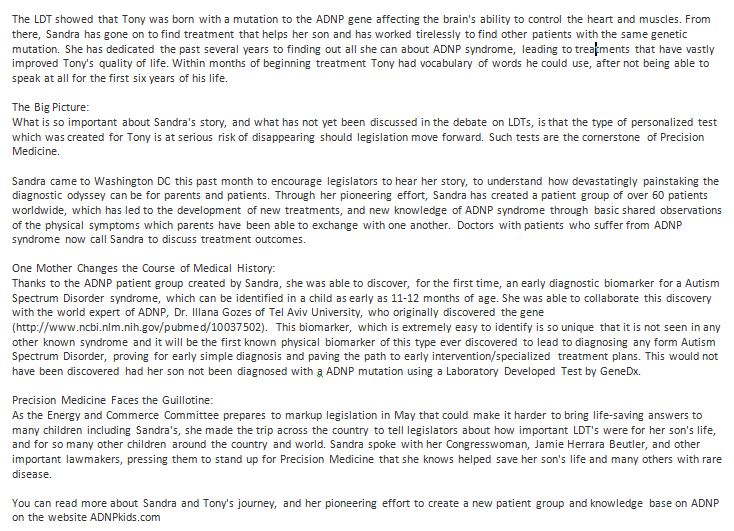 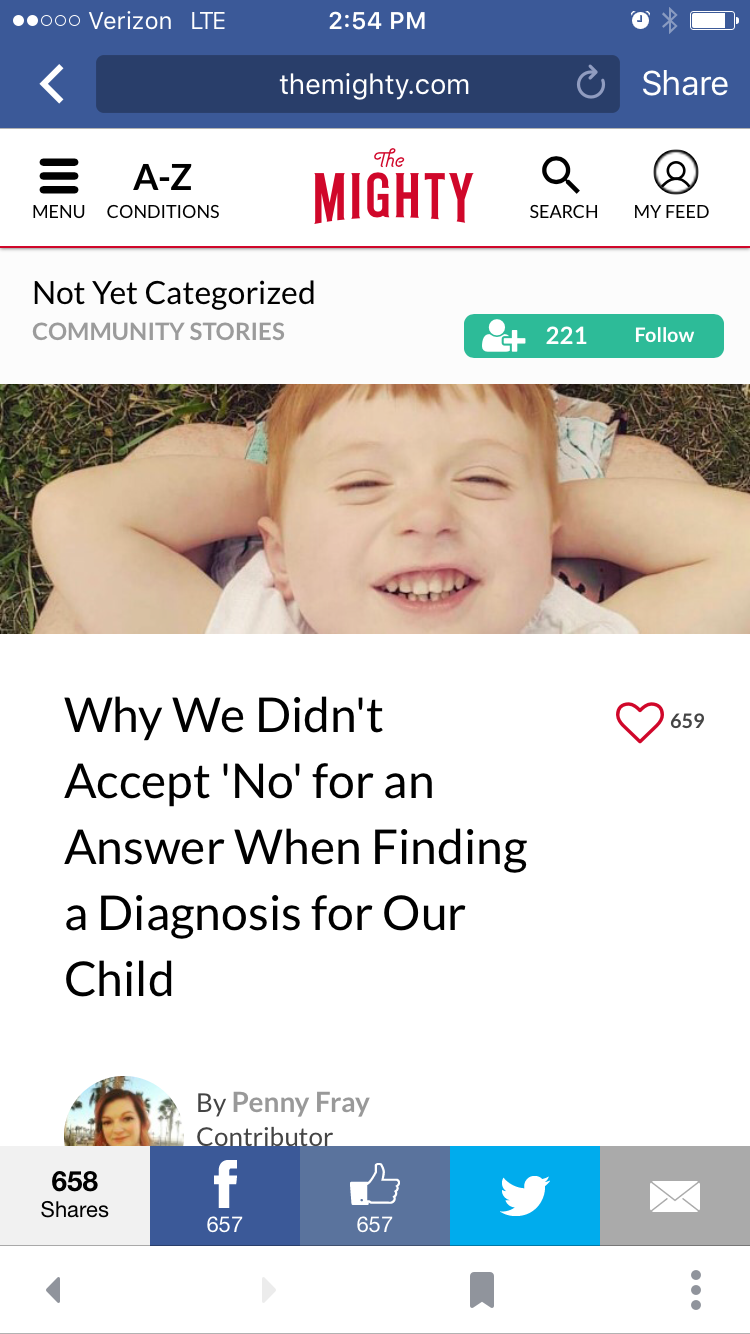 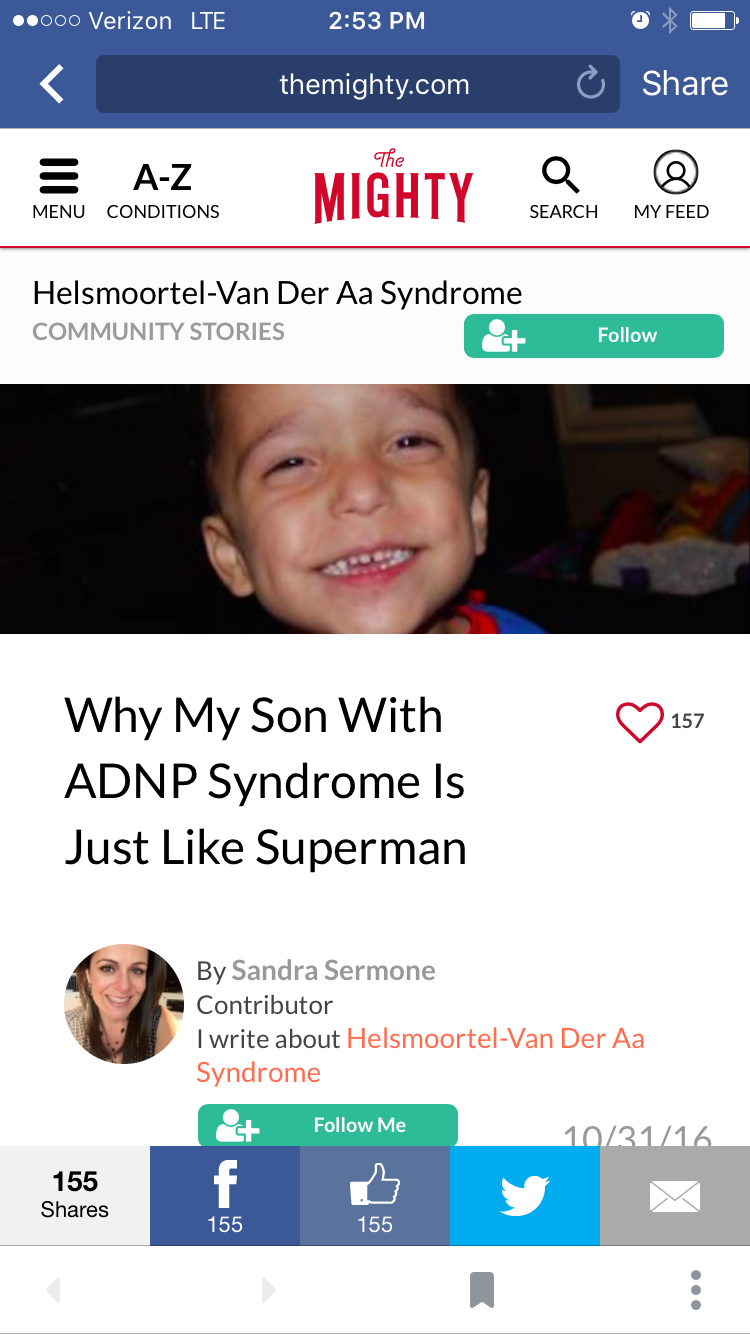 All rights reserved.  No portion of the content of this website may be reproduced in any manner without the written permission of the author/creator.
This information guide is not a substitute for personal diagnosis. Families should consult a medically qualified clinician in all matters relating to genetic diagnosis, management and health. Information on ADNP changes is a very fast-moving field and while the information in this guide is believed to be the best available at the time of publication, some facts may later be updated or change.
ADNP, ADNP Syndrome, Helsmoortel-Van Der Aa Syndrome, HVDAS, Helsmoortel, VanDerAA, ADNP Gene, ADNP Mutation, ADNP Gene Mutation, Tony Sermone, Illana Gozes, Cognitive Genetics